This song came out in 1973, when I was a sophomore in high school — I didn't realize it was that old. My how time flies when you're having fun. Anyway, this line kept popping into my head when I wore this outfit, so I figured why fight it? 
This jumper has been hanging in my closet for years and years — the tags were even still on it! It's a ribbed sweater knit (you can't really tell from the picture), so I was probably uncomfortable with how curve hugging it was. It also seems so simple now, but I may not have thought to wear a belt before, and it really changes the look of the outfit.
Black belt or Red belt? 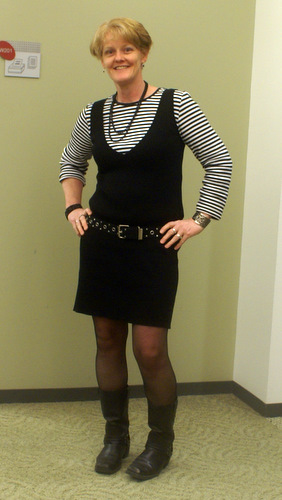 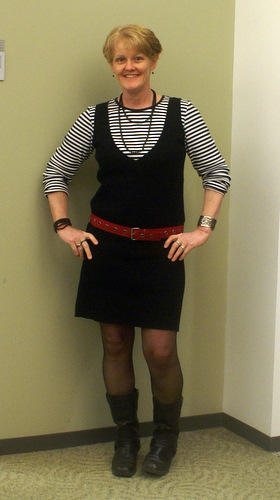 My black-and-white striped shirt inspired my ear worm (I hope it's not contagious though). In retrospect, however, my shirt was probably more like the costume of a traditional mime than prison stripes or the Breton stripes that Coco Chanel popularized after a visit to the French Riviera in the 1930s.


I'm really enjoying these challenges.
It's like playing dress up in my own clothes. 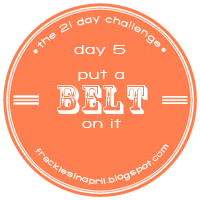 In addition to the 21-Day Challenge, I'm also linking up to Visible Monday at Not Dead Yet Style, because well — I thought that I was pretty visible in this outfit, especially with the red belt, and also because I have a bit of a silly pose. 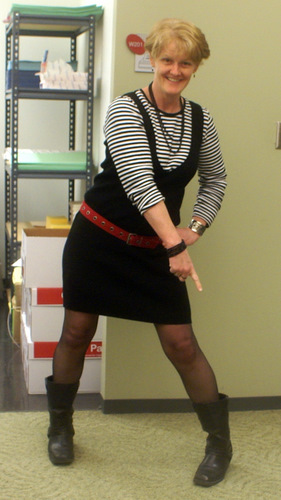 Which color belt goes best?
Posted by Kari at 3:44 AM