One reason my few days off stretched to over a month was because I didn't know how to pick it up again. Do I start where I left off? Do I start where I am now? And the longer it took to answer this question, the harder it got to make a decision. 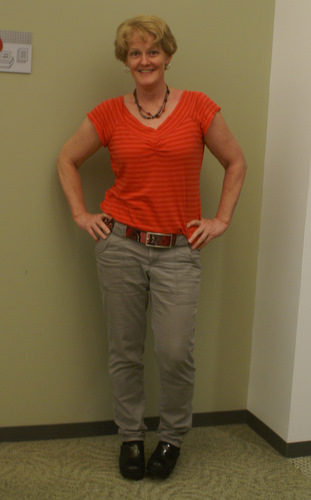 shirt -- (thrifted)
pants -- London Jean (Victoria's Secret)
belt -- Nine West (thrifted)
necklaces -- (one gifted, one thrifted)
shoes -- Dansko Professional (outlet)
This is pretty much a standard go-to outfit for me. A pair of comfy pants, a short-sleeved shirt, and my Danskos -- what's not to like? I may not be the most fashionable person around, but hey -- I'm dressed appropriately and, most importantly, comfortably for work, and no time was spent on contemplation of said outfit.
I was pretty good about taking pictures while I was on sabbatical, which brings me to my first dilemma and the first hurdle to get over (see above). What do I do with all the pictures I took?! I've been having this argument with myself -- one side of my head says to post them all. Who cares when they were taken?

The other side of my head thinks it's not that easy. Some of the outfits reflected my mood; some I wore to a specific event (graduation); and some reflected the weather. If I try to post now on old pictures, I won't sound natural -- it won't sound like me.

And then what about the outfits I'm wearing now? I don't want to post them a month or two from now. And I'm just going to get further and further behind if I keep posting old stuff -- I'll be spending all my time trying to catch up. But yet, I really like some of my older pics; I also really hated some; and some I just need advice on what in heaven's name went wrong?


Really, now -- what were you thinking?
Did you even stop to look in the mirror before
you walked out the door?
In case you think these musings are all fashion centric, they're not. These are the types of things that I agonize over and over about, ad infinitum, on a daily basis. Only the topic changes. I can think of a thousand reasons to do something a hundred different ways. And while I'm having these arguments with myself -- nothing gets accomplished. I don't move forward -- I just get farther and farther behind, and I get more and more discouraged, and I end up feeling like a failure.

And in the end, what does it really matter? I mean, one of the reasons I'm blogging is to get myself back in the habit of writing, and to reflect on what is happening in my life. And as much as I hated that Nike slogan in years gone by, I think that I need to take a page from their book and JUST DO IT for crying out loud!

By the way, I really like the belt that I wore in these pictures.

The belt was way too big for me (and why exactly do I feel the need to say that?! It's not like you can tell from the pictures. I guess I felt a little uncomfortable wearing it though, because it did seem noticeably big.). Anyway, I wasn't sure if the colors matched, but I think they did. It was an easy way to bring something interesting to my outfit.

When you fall off the horse,
do you redo what you missed?
Or do you just say forget about it,
and say, "What's done is done,"
and then continue on your merry way?
Posted by Kari at 9:36 PM 11 comments:

Back in the Saddle

Question: What does riding a horse and writing a blog have in common?

What could these two things possibly have in common?
Give up?
This expression,

"When you fall off the horse,
you have to get right back on."

sums it up for me.

If you don't get right back on,
it gets harder and harder.
And that's kind of what's happening with me right now with my blog. I took, what was going to be, just a few days break. Those few days have stretched into more than a month, and now I'm finding it very hard to get back in the saddle.
The first few days off were intentional -- my life had just gotten too crazy, and something had to give. I had to do two hours of mandatory overtime for a week or two in my 2 to10 job (I have a 2-to-10:30 pm job instead of a 9 to 5 job, which is a story for another day). I had also gotten four side jobs to do -- two dissertations to edit and two college textbooks that needed a light edit and a proofread. When it rains, it pours, right? I was just going to take a day or two off, and hey, bloggers do it all the time.
But then on top of my work load, my kids were all graduating from school! Three graduations in three weeks -- how is that for timing? Yay! and hip, hip, hooray! First up was my oldest daughter and her boyfriend -- they graduated from pharmacy school.
My son and his girlfriend graduated a week later. Erik earned a BS in mechanical engineering, with a concentration in aerospace engineering.
His red, white, and blue sash is from doing a study abroad in France. My son's girlfriend, Jackie, earned her second (or is it her third?) degree -- she earned a BA in women's studies to add to her BA in anthropology and art history that she earned last year.


I'm really bummed that I don't have a picture of Jackie in full regalia, but I wasn't able to take off of work to attend her ceremony -- that mandatory overtime thing again.

Last, but not least, my youngest daughter graduated from high school, and that event carried its own huge ball of freaking out emotions to contend with.


Wait! I have even more excuses!
Mother's Day and my birthday also were in that time period. I don't know about you, but days that are set aside to celebrate *me* never quite turn out the way that I had hoped for or envisioned. My oldest daughter and my son really outdid themselves this year though in making those days special. My youngest gave me flowers.
Along with all the emotional upheaval of three graduations and special days and the intense time suck that was work, we (as in the East Coast) had our first heat wave of the season. I don't know about you, but I don't have air conditioning. Not because I function better in the heat (snort!) or because I somehow sleep better with fresh air (double snort!) -- it's because I live in an old house. The installation expense coupled with the idea of losing what passes for closets in this house precludes air-conditioned comfort from becoming my reality.
Instead I lose all semblance of being sane and rational, because trying to function in that kind of heat for extended periods and not being able to sleep is ... well, it's just not fun. I get snappy. I get edgy, I get frazzled, and yes, believe it or not --
I turn into a first-class, grade-A b*tch,
who whines incessantly.
(Yeah. Sweet li'l old me. Just ask anybody who knows me).
In addition to the miserableness that a heat wave wreaks on my sanity, it causes my yard to go completely out of control. I've been weeding and weeding, and my yard still looks like this (and this is just one small corner)
As the Urban Dictionary says, "the excrement made physical contact with a hydro-electric powered oscillating air current distribution device." I rather like that way of saying the sh*t in my life hit the fan.
The longer I stayed away, the harder it was to write another post ... I couldn't even bear to open Google Reader, I was just way too overwhelmed. Hope you all can forgive me for not stopping by and visiting. This doesn't begin to cover all of my angst and anxiety and guilt and emotional upheaval, but it's a start. Rest assured, my saga *will* continue ...

tank -- Vassarette (KMart)
shirt -- MKM Designs (Marshalls)
pants -- Gap 1969 (Gap)
necklace -- thrifted
belt -- nautica (thrifted)
shoes -- Dansko Professional (Dansko outlet)
I was actually quite proud of this outfit. I like my white jeans a whole lot more in this "matchy-match" look than when I channeled Mr. Clean in the white-out challenge.


Why is being "matchy match" a fashion sin that is almost comparable to death?