Were you able to wear your school colors during the excitement of March Madness? I'd like to say that I color coordinated this black-and-blue outfit to my school colors but unfortunately that would make me a mighty tall stretcher of truth.

The truth is that no special thought went into selecting the colors for this outfit. Well ... that's not entirely true. I do happen to really like how black and blue looks together. What I couldn't decide about though was whether the multistrand necklace or the single strand one was better. Which do you think? (Ignore the fact that I was committing a fashion faux pas by wearing a necklace and earrings at the same time! Oh the horror of it.) 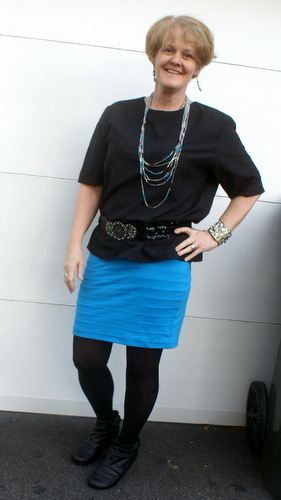 
* If I put it in teeny tiny letters nobody will notice that my skirt was maybe a bit too tight and a bit too short. 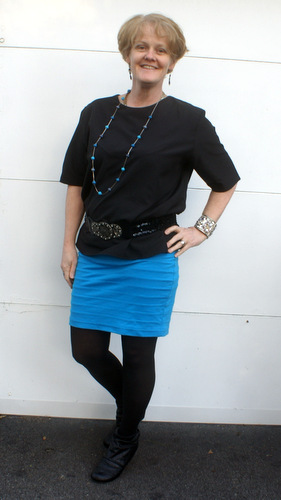 But back to the excitement of March Madness ... Woo hoo! and Woot! Woot! "What excitement?" you ask. Why, the excitement of the Lehigh University men's basketball team (my alma mater) beating Duke in the first round. This was a big deal. a HUGE deal. a gigantic enormous amazing HUGE deal. Did I say it was a big deal? LOL. Oh my. Not only was it Lehigh's first-ever NCAA Tournament win — as a 15th seed, but also they beat Duke (a 2nd seed) in doing it. They BEAT Duke! Now, c'mon that is huge. HUGE. Duke is Duke. Who hasn't heard of Duke? They're a powerhouse. Don't get me wrong, Lehigh is amazing, and I feel so fortunate and lucky that I was able to go there as an undergraduate. But sports is just not all that emphasized (except for wrestling. Oh, and then there's that annual Lehigh versus Lafayette rivalry thing) Whatever. You don't go to Lehigh to play sports — to make it to the big leagues. You just don't. And they won in style and class, and pulled off an upset! How I wish that I could have been back on South Mountain to celebrate. 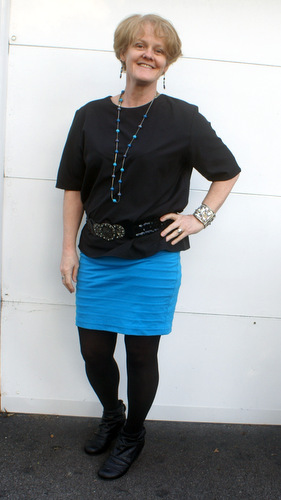 And then there was the excitement on the women's side as well! My second alma mater, the University of Delaware, was playing as a 3rd seed! Woo hoo! and Woot! Woot again! Even though they were expected to do well and to play in the tournament, their story was just as exciting.

Four years ago, when Elena Delle Donne graduated from high school in our tiny little state, she was the number one college recruit for women's basketball in the country. No surprise, she signed with basketball powerhouse — the University of Connecticut. She left for college, and the story turned upside down and inside out. Two days later she left UConn, came back home, gave up her scholarship, and enrolled at the University of Delaware. The women's hoops world was abuzz as to what would possess her to do this. (You've got to understand — UD is not what you would call a basketball school. In fact, it's probably more well known for producing our vice president, Joe Biden, than for women's basketball. Nobody knew why she left and people speculated, and some really nasty and cruel things were said about this 18-year-old kid.)


It turns out that Elena was homesick, and mostly homesick for her older sister, who was born without sight or hearing and with cerebral palsy. Elena sat out basketball for a year (UConn didn't release her), and then started playing basketball for UD. This was her third year, the team has finally been able to gel around the superstar player that is Elena Delle Donne and come into their own. And make no mistake — Elena is a superstar. Her story is an amazing feel good story — read more about Elena here and here. 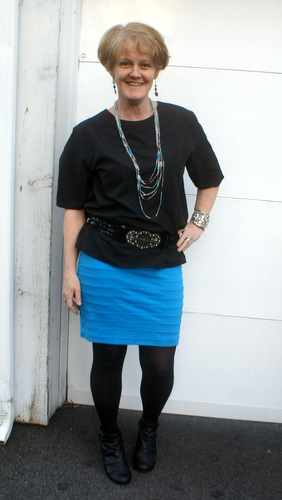 I would like to say that both my teams went on to win and win big. I think you could safely say that they did and they didn't. To me, we can take lessons from both teams — from the Lehigh men's team to believe in yourself and the UD women's team of what is really important. And those are wins — that is what sports really should be all about.

Linking up to Fashion Friday at Blonde Episodes. 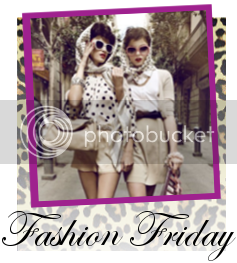