Roses are red, my love, violets are blu - u - u - e
-- Bobby Vinton
-- Jim Reeves
The ladies at EveryBody EveryWear picked florals for this month's challenge. I didn't have any floral arrangements to wear, but luckily my daughter came through with a skirt that she let me borrow. Once again, I hoisted it up, and wore the skirt as a shirt (that is fast becoming a habit with me). 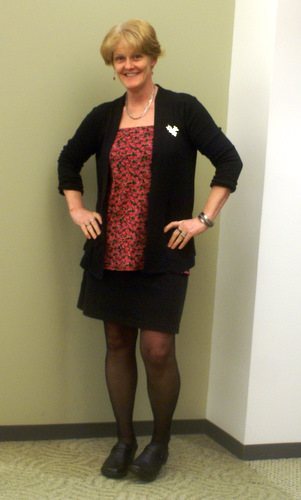 shirt -- New York & Company (borrowed)
skirt -- Express
cardigan -- Old Navy
shoes -- Thom McKan (Kmart)
You can't really see the print on my top, but it was a bed of roses. 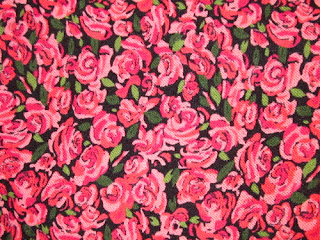 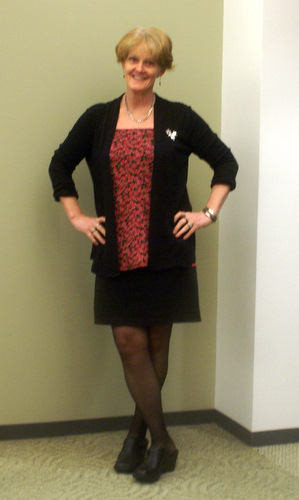 Some fun rose facts:
And here's a picture of the real thing -- my kids gave me this rose bush for Mother's Day several years ago. It still blooms every year. 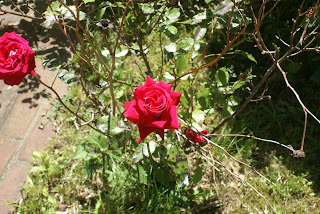 I always save the rose petals from any roses that were given to me. This year, I want to try and make beads out of the petals. It seems like it's a relatively easy process -- just takes time. There are a lot of on-line tutorials for making them -- basically it seems like you just collect them, grind them, and boil them (you boil them a bunch of times over several days). Apparently, they last for a long time though if made right. Click here to see one version on eHow.


Who did you get your first roses from? 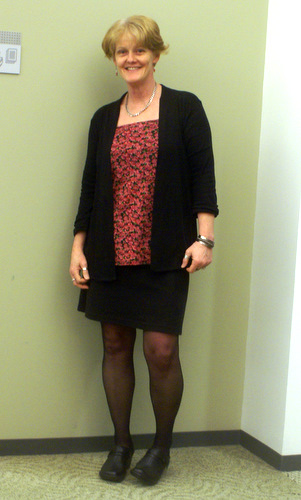 Now head on over to EveryBody EveryWear to see how everybody else styled their florals. I'm looking forward to seeing the colors.

Is she a nurse? Is she selling ice cream? No! She's taking part in the Bloggers Do It Better interpretation of the White-Out spring trend (wow, was that a mouthful, or what?). 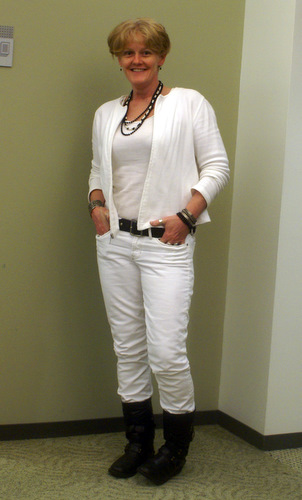 tank -- BVD (Kmart)
cardigan -- Croft & Barrow (thrifted)
pants -- Real Straight by Gap
boots -- (DSW)
I don't know about this look -- I really don't. I like the idea of it, and I like it on other women, but I don't think that I like it on me. Done right, it looks sophisticated and elegant. Done wrong? Hmmm .... Suffice it to say that I don't think I'm looking very sophisticated or elegant in these shots. Maybe my top needed to be more flowy or silky or something ...And maybe heels instead of boots would have been a bit better. 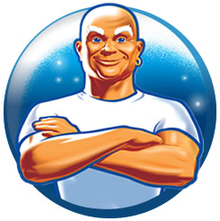 Now I'm disappointed that I didn't think of that before! I could have worn a t-shirt, and a hoop in one ear. And what a great Halloween costume this could be. Do you remember the Mr. Clean jingle?


And what about the commercial?


I did have fun trying this spring trend, and it was definitely not something I would have tried before I became a fashion troll! What do you think I could have done differently? 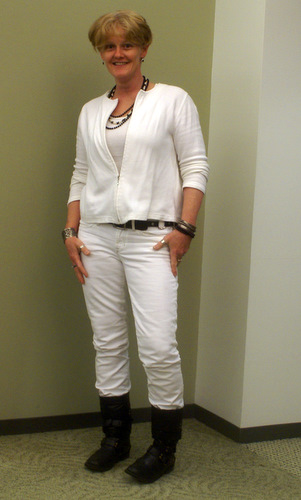 Other interesting "white" things include:
What did I miss?
Now head on over to Pretty, Sparkly, and Shiny to see how other Bloggers Did White-Out Better! 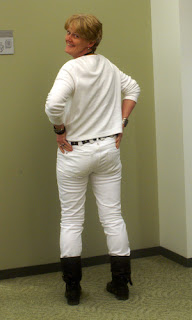 My first job out of college was tramping around landfills in the state of New Jersey to see if the ground water was contaminated. It was an eye-opening experience, to say the least -- to see not only the mountains and mountains of garbage but also the perfectly good stuff that people threw out, which then became garbage. I think that's when my passion for the environment became a full-fledged commitment. So in keeping with the spirit of Earth Day and the 3Rs of the environment (reduce, reuse, recycle), I'm reusing some pictures in this post. 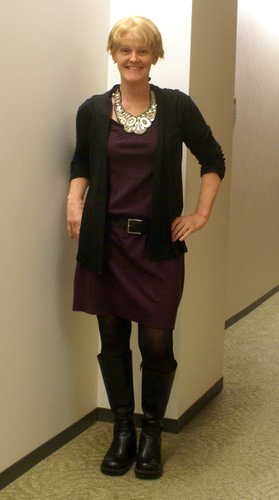 dress -- Mossimo (Target)
cardigan -- Old Navy
boots -- Nomad (thrifted)
necklace -- JCPenney
I first posted these pictures on January 11 of this year. (Click here to see these pictures in their original post. I didn't include this fun snappy narrative along with it, so you're really better off just staying here.) 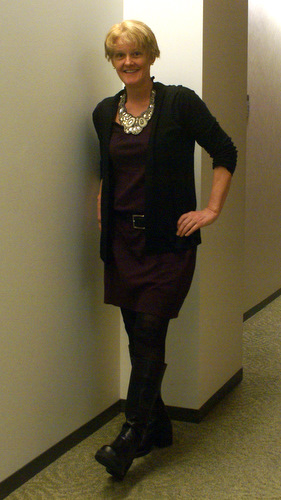 Back in January, I thought I was being so brave by wearing this outfit to work -- those big honking boots and then the statement necklace were really different from my usual style. What were people going to say? And what were they going to think? (and why do I get so unglued about what people think? does it really matter that much?) Now, my boots and necklace seem kind of mundane, and I don't blink an eye about wearing them. 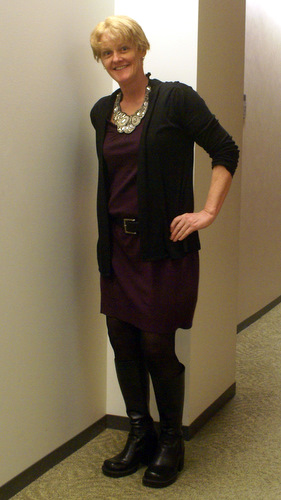 Reusing pictures wasn't the only way that I celebrated Earth Day though. It was cold, and instead of turning on the heat, I built a fire. I saved oil, and got exercise by feeding that darn fire. It was hungry, and I had to keep getting up for food. 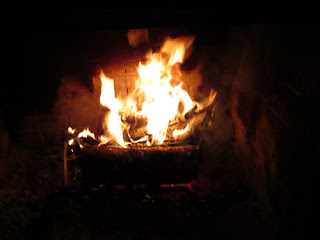 I rode my bike instead of taking a car -- great exercise. 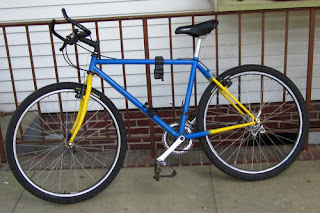 I composted my orange peels instead of throwing them away. 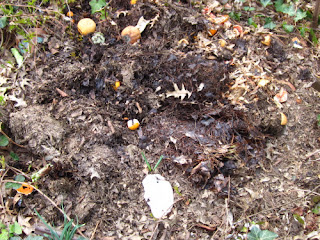 I recycle and reuse as many things as I can. If  I don't know how to reuse something, then I save it and scour the eco blogs to try and find a way to use them. (I'm still trying to find something cool to make from all the bread tabs that I've been saving -- anybody have any ideas?). 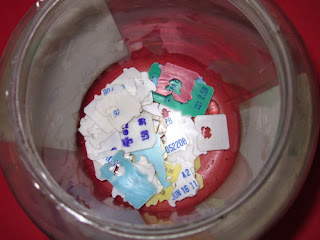 Over the years, I've found all sorts of ways to use things that would otherwise have ended up in a landfill. Here's a bag that my mom made from juice packs. 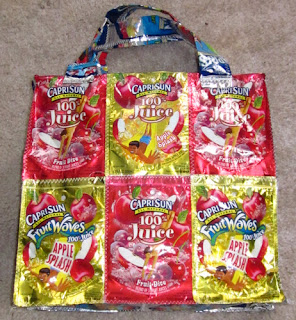 And a pillow that she made out of clothing labels. It's a little bit beat up, but I still love it a lot. My mom saved labels for a long time, and whenever she found one that reflected something that was of interest to me,
it went into my pillow pile. 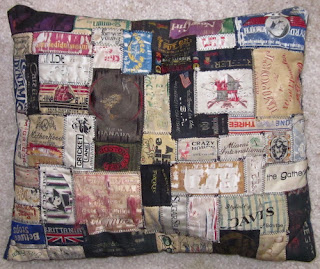 Coasters made from record albums, circuit boards, and magazines. 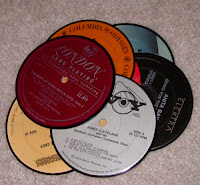 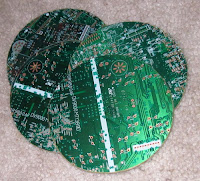 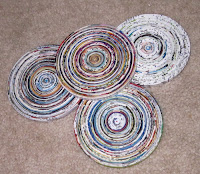 Frames made from bicycle chains.
Environmentalists often get a bad rap or are ridiculed for some of the things they do (I once stopped eating yogurt because I couldn't figure out what to do with all the containers!) but taking care of the world we live in is something that I believe we should all embrace -- to me, it's no different than taking care of your home or your body.

I know that I can be somewhat obsessive about this issue, but the good thing about the 3Rs is that you don't have to do it all to make a difference. I mean, I read one article that said you could save your nail clippings and use them for a pot scrubber. I decided that that had way too much of an ewwwww factor for me, and mine go in the garbage. Find one thing that you're comfortable with doing and incorporate it into your lifestyle. 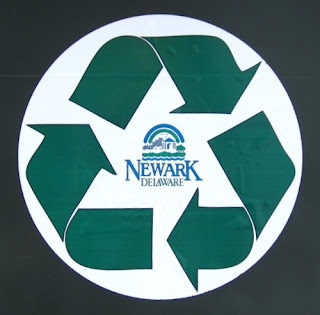