Pants with an Attitude

Day 10 of the 21-Day Challenge was to wear a closet orphan — an item from your closet that, for whatever reason, you rarely wear. 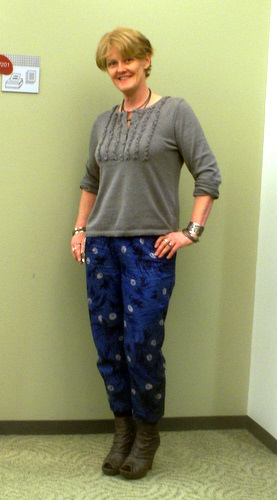 sweater — Liz Claiborne (thrifted)
pants — elevenses (Anthropologie)
shoes — Mia (DSW)
These pants are one of my closet orphans. They were one of those spur-of-the-moment purchases, that you kind of regret almost immediately after the purchase. It ended up taking me almost a year before I was able to figure out how to wear them. I wore them with this sweater back in May, and I wonder how long it will take for me to wear them again. 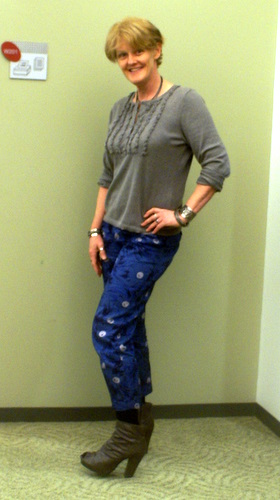 Anthropologie is one of those stores where I look but don't touch. They have some really nice things, they play the best music, and their store is laid out beautifully so it's no surprise that I like to go in and browse, but it usually ends there. Their items tend to be very expensive, and more often than not, I think their things are — yeah, I'm going to say it — overpriced*. I can't afford their clothes unless they are marked down and then those marked-down prices are slashed again. A lot of people basically stalk their site, waiting for the prices to be cut. I don't have that kind of patience, and I don't think their things are that special. It surprises me to see the Anthro love that I have come across in the blog-o-sphere.


*Saying that Anthropologie is overpriced may almost be sacrilegious in the blogging world. 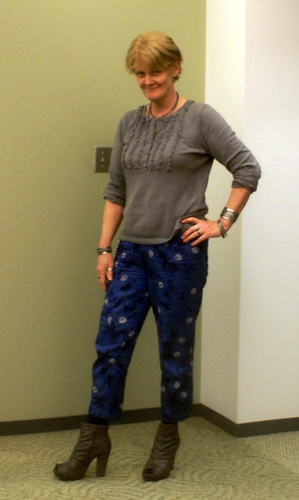 These pants were a case in point. They were originally well over $100 (if not close to $200). By the time I came strolling in the store, they had been marked down to somewhere in the neighborhood of $7. When they flew off the rack and into my arms and told me, "You would be a sucker to pass me by," I was sold. How could I let an attitude like that pass me by?! Seriously though, they're a nice pair of pants, and well made, but I don't think I would have paid more than $20 for them. 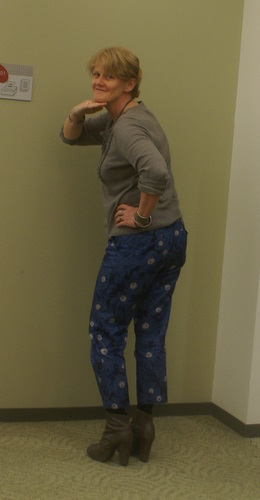 The pants made me act this way! Really.
With an attitude like this, don't you think that these pants need to be incorporated into my wardrobe more often?
How else would you wear them? 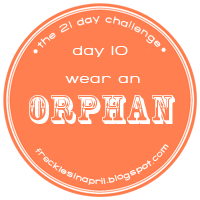