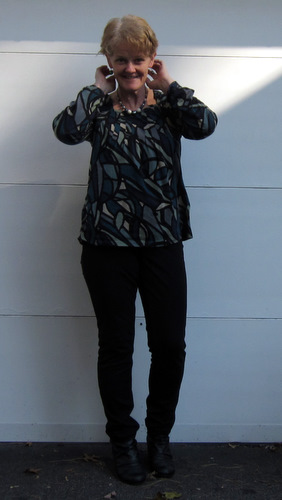 shirt — ana (thrifted)
jeggings — 17/21 Exclusive Denim (Marshalls)
shoes — Blowfish (DSW)
necklace — thrifted
These days when I have the option, I am likely to forgo the jeans and put on something that's a little more dressy. Take this outfit, for example. 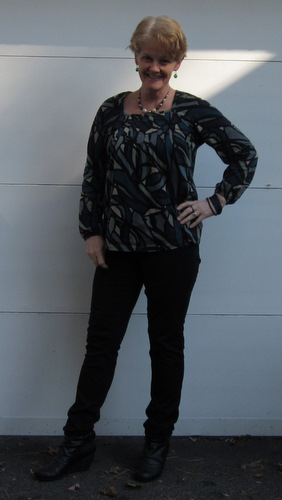 I wore this to work on Casual Friday a few weeks ago, and then, wonders of wonder, I wore it again to a high school cross country meet — the county championships. (I wore it with a pair of flat boots at the meet so I would be able to run around to all the vantage points on the course and see the kids running.) 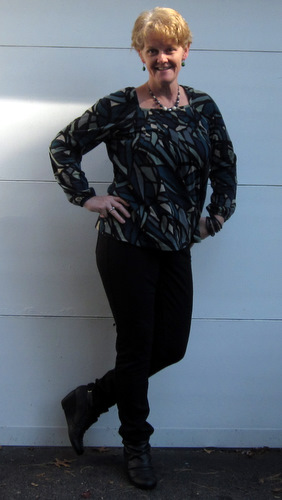 It's not that I don't still love my jeans and T-shirts, I do. I'm just finding that it can be fun to wear something a little different and change up my look a bit. Okay. I know it isn't that much of a change. I mean, it's not as drastic or as different as sporting spiked purple hair or black leather and chains, but still ... 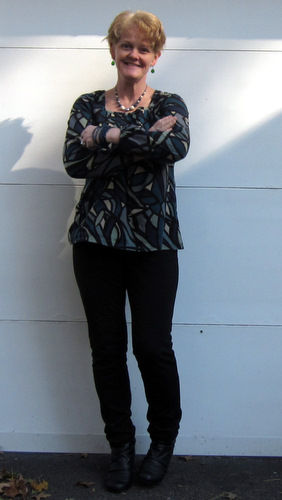 I love the colors in this shirt — the blues and the greens, and the pattern reminds me of a stained glass window.

The cross country race was one of the best races that I had ever been to. The top race of the day, and one of the reasons that I went, was the girl's varsity race. It featured two girls — Julie Macedo and Haley Pierce. Julie is ranked number 1 in the country (yes, in the COUNTRY! from our tiny state), and Haley is ranked number 12. Two girls in our tiny state of Delaware are nationally ranked! Woo HOO! What made the race especially exciting was that they don't usually run against each other (they are in two different divisions — the big school and the small school division). 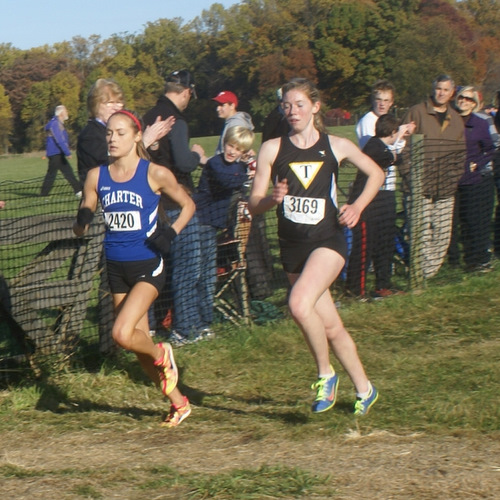 Up until this year, Haley had been the number one high school runner in Delaware (she placed fifth at the Nike Cross Nationals last year, and Julie was 16 seconds behind her). Then Haley was injured in August, and Julie exploded in the early season, becoming the first girl in Delaware to break 17 minutes for a 5K. I thought it was going to be a great race, and wow! Was it ever! I could not have predicted the result in a million years!

They literally ran each other into the ground! Neither one of them was going to concede or let the other get the better. Wow ... The two of them ran neck and neck for almost 3 miles. Haley pulled ahead with about 400 yards to go, and then, all of a sudden — she went down. She just crumpled. Julie kept going, but oh my! If you've ever seen somebody run who had nothing left to give, that was Julie. I wasn't sure if she was even going to make it across the finish line! As she was staggering up that final hill, up flies the girl who had been running in third place, and she won it all! WOW. I heard later that Julie and Haley ran their first mile in 5:10! 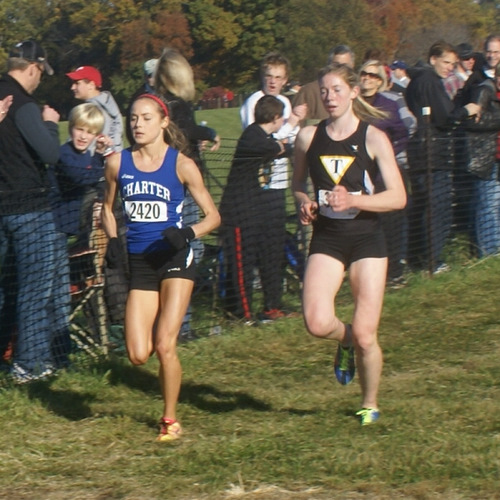 Haley and Julie ran in the state finals the following weekend. They ran on the same course, but in two different races. I was on pins and needles all day, checking the local running site every five minutes to find out what their times were. (I was pretty sure that they were going to win their respective races). And guess what?! They both posted a 17:28! The same time for a 5K in two separate races. Wow. They will most likely meet again in the same race at the Southeastern Nationals next weekend. Can't wait to see what happens there. (Haley won it last year, and Julie was 8th!) No matter what, it'll be an exciting race!
These girls have inspired me to start running again!
Right now, however, I need to figure out what to wear to work tomorrow. It's Casual Friday, and I don't want to wear jeans! 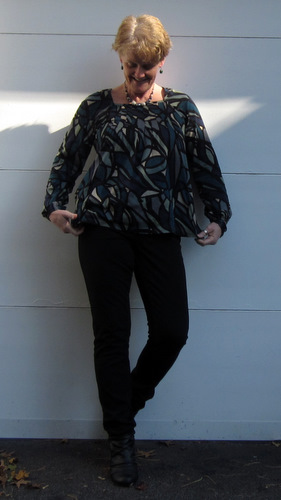 With my thrifted shirt and my thrifted necklace, I'm linking to Spunky Chateau's Thursday Are for Thrifters. Stop on over to see some more thrifted finds.
Posted by Kari at 10:51 AM

Email ThisBlogThis!Share to TwitterShare to FacebookShare to Pinterest
Labels: Blowfish, jeggings, Thursdays Are for Thrifters