Wow! What a difference 24 hours can have! But before getting into what's changed, here's the outfit that I wore on Monday, June 27, 2011. 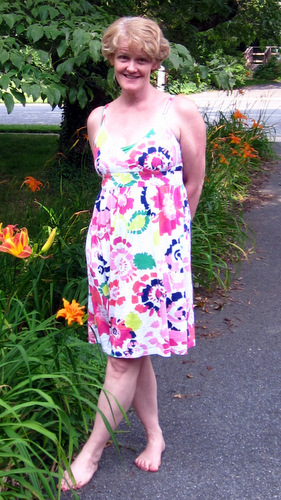 dress — Old Navy
camisole — Route 66 (Kmart)
I'm barefoot (but not pregnant! snort) in the top picture because, once again, I had trouble figuring out my footwear. I liked the idea of wearing boots, but they just didn’t look right on me (they looked a whole lot better on my much younger daughter!). I’m also not keen about how the dress looks on me—I’m not sure if it’s the empire waist that I don’t like or if it's because the length accentuates my fat knees (that’s probably what it is). Or maybe it’s because my legs are so fish-belly white? 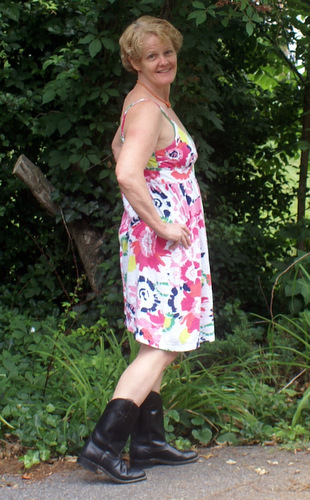 boots — Laredo (thrifted)
So what has changed? Well, on Monday, June 26, I got all dressed up for work (I did wear a sweater to make my dress more work appropriate), I raced to work sedately drove the 45 minutes to work, and then shortly after walking in the door, I was laid off. Yep. The ax fell. That's why my pictures are outdoors instead of in front of my usual blank wall. And I had to take them myself—a rude awakening! It really made me appreciate how hard it is for all of you who take your own pictures! I was really spoiled by my friend who would take my pictures for me. 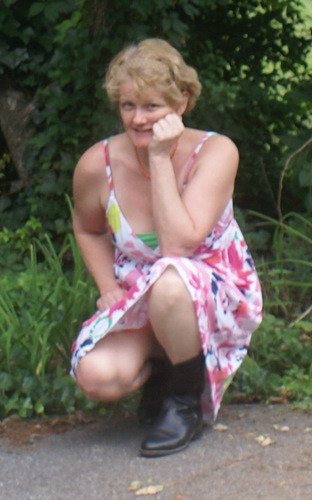 My bright and cheery sundress was inspired by the legalization of same-sex marriage in the state of New York on June 24, 2011. I was happy to hear that the bill had cleared the last hurdle in the New York Senate and was signed into law by Governor Andrew Cuomo shortly before midnight on Friday night. The law takes effect 30 days later on Sunday, July 24th. (I got tears in my eyes when I saw that the city clerk’s offices in all five boroughs will be open that Sunday so that couples can wed immediately after receiving their marriage licenses.)
Even the Empire State Building was rainbow colored on June 24th!

The passage of the bill did not impact me as directly as it did some of my friends—I am not gay, so I have always been free to marry whoever I wanted and to then be afforded all the rights, privileges, and respect that our society bestows on a married heterosexual couple. However, when we deny a large segment of our population* the right to marry the person they love, we have not only legally sanctioned discrimination but also encouraged the hatred and fear of our brothers and sisters, and that affects and hurts us all. Legalization of same-sex marriage in New York won't solve everything, but I can’t help but believe that it’s a huge step forward. I’m excited and hopeful to see what tomorrow brings.
*An April 2011 report by Dr. Gary J. Gates, the Williams Distinguished Scholar at the Charles R. Williams Institute on Sexual Orientation Law and Public Policy, estimates that 9 million Americans—a number roughly equivalent to the population of New Jersey—identify as LGBT. The Williams Institute is a research center, located at the UCLA School of Law, whose mission is the advancement of sexual orientation law and public policy through independent, non-partisan research and scholarship.
I swear that I'll get much better about posting—last week, well suffice it to say that I was kind of up and down and all around! Even though my lay off was expected, it takes some getting used to. I'm definitely a bit worried, but I'm trying not to let that be the overwhelming thought, and instead look at this as an opportunity for me. I wonder what doors are going to open for me and whether they will swing wide to let me through or will I have to force them open, inch by inch?
I'm keeping my fingers and toes crossed that they'll be swinging wide!